The Lord of the Rings: The Rings of Power is the reason to watch Prime Video.
Ben Rothstein/Prime Video

September ushers in fall premiere season for traditional and cable networks, bringing new episodes of primetime TV shows and sports back to the screen. Whether you’re a cord-cutter or not, it’s likely your streaming plate will get a little fuller. Between The Rings of Power on Prime Video, House of the Dragon on HBO Max and Hulu’s lineup of network premieres it’s a busy time, making the “keep” section of this month’s list heftier.?
Starting Sept. 19, Peacock will have new episodes of NBC and Bravo shows exclusively on its platform the day after their network debuts. Series such as Law & Order will no longer stream on Hulu, but Hulu has new content arriving from Fox, ABC and other networks. With that in mind, both services may be keepers for you in September — or not.
Each month I give advice on which streaming services to cancel and which ones to keep, based on their new releases and current lineup. You may be thinking about canceling a few streaming subscriptions to cut costs, and I’d like to offer my strategy: Churn like ice cream.
This means you subscribe for a period, cancel, choose a different service and later resubscribe, putting your favorites in a rotation. Feel free to pick one or two must-haves for the year and treat other streaming platforms like seasonal add-ons. The upside is that you can save money when Netflix, Disney Plus, HBO Max and others don’t have the content you want to watch at a given time. Just remember to shut off auto-renewal for your monthly subscriptions. Rotating may not be an option if you’re sharing your accounts with people outside your household, but if you can work out a system with your streaming clique, go for it.
Here are my recommendations for which streamers to keep or drop for September, primarily based on new TV shows and movies arriving on each platform. This time, there’s a little bit of live sports thrown in the mix because it’s football season. Of course your tastes may be different, but if nothing else, I urge you to at least consider the concept of rotating for savings. It’s easier than you might think.

You should probably keep these subscriptions in September
Prime Video:?Don’t miss The Lord of the Rings: The Rings of Power on Sept. 1 and its two-episode premiere. Season 1 has eight episodes total that will air into October. Sports fans can catch the NFL’s Thursday Night Football beginning Sept. 15.
See at Amazon
Netflix: The biggest drops this month are Cobra Kai season 5 on Sept. 9, anime?Cyberpunk: Edgerunners?(Sept. 13) and Blonde, the fictionalized story based on Marilyn Monroe’s life. Debuting on Sept. 28, Blonde is Netflix’s first NC-17 original movie. Other releases include the Ivy + Bean movie trilogy (Sept. 2), a?K-Drama?version of Little Women (Sept. 3), The Anthrax Attacks: In The Shadow of 9/11 (Sept. 8), Queen Latifah’s End of the Road movie (Sept. 9), Do Revenge starring Maya Hawke and Camila Mendes (Sept. 16) and Fate: The Winx Saga season 2 (Sept. 16).?
Hulu: The Handmaid’s Tale returns with season 5 on Sept. 14 and The Kardashians are back on Sept. 22. If you watch Hulu for its network shows that air the next day, look out for new seasons of Atlanta (Sept. 16), 9-1-1 (Sept. 20), The Cleaning Lady (Sept. 20) and The Resident (Sept. 21). On Sept. 22, Hulu drops premieres for Abbott Elementary season 2, The Conners season 5, The Goldbergs season 10 and The Masked Singer season 8. You can also stream new episodes of The Simpsons, Bob’s Burgers, Shark Tank and Bachelor in Paradise later this month.
See at Hulu 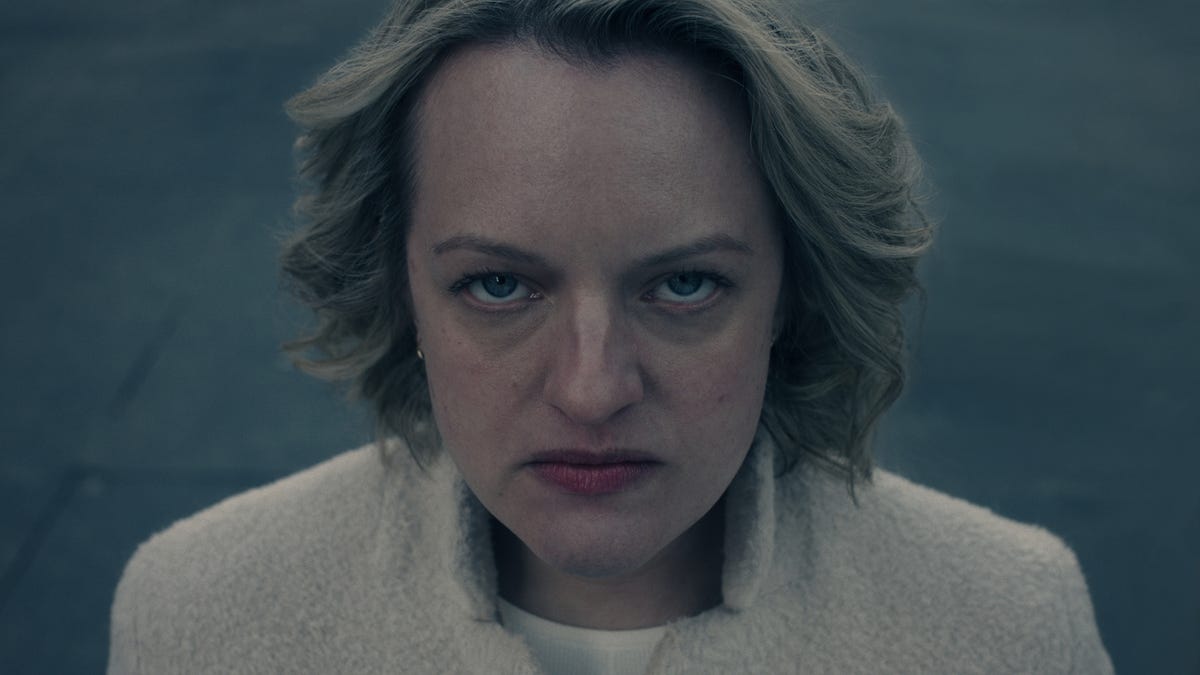 Is June worth your Hulu subscription when The Handmaid’s Tale drops season 5?
Hulu
HBO Max:?House of the Dragon and Harley Quinn are still going strong. Additionally, The Nevers season 1 part 2 (Sept. 16) and the Elvis movie (Sept. 2) arrive in September. Wondering where The Vampire Diaries landed after leaving Netflix? Find the Salvatores here starting on Sept. 4. And if you’re a fan of Chip and Joanna Gaines’ Magnolia content from Discovery, 25 titles touch down on HBO Max this month.?
See at HBO Max
Disney Plus: I only recommend keeping this service this month if you’re a Marvel or Star Wars fan, or a parent with young kids. Disney Plus moved its new Andor show from Aug. 31 to Sept. 21 with a three-episode premiere. The show has 12 episodes that air into November, so if you want to wait a few months and binge, go for it. She-Hulk is still spinning, but new Disney Plus Day releases include Pinocchio (with Tom Hanks), Thor: Love and Thunder and the new Cars on the Road series, which all drop on Sept. 8. Dancing With the Stars season 31 debuts on Sept. 19 and Hocus Pocus 2 starts streaming on Sept. 30.?
See at Disney Plus
Peacock:?Sunday Night Football starts with a kickoff game on Sept. 8 then switches to Sundays beginning Sept. 11. With NBC shows rolling in this month with next-day streaming, you can upgrade to a Premium account to see full episodes and seasons on Peacock. New subscribers can sign up in September for only $2. You can also catch the Vampire Academy TV series (from Julie Plec, showrunner behind Vampire Diaries and The Originals), Bravo’s Real Girlfriends of Paris (debuts Sept. 6 with weekly releases), Days of Our Lives (Sept. 20) and NBC’s lineup. Of course, you can also hold off on a Peacock subscription and binge what you want in October or November.?
See at Peacock
Starz: Stream the debut of The Serpent Queen on Sept. 11, which features Samantha Morton as French monarch Catherine de Medici. Raising Kanan will continue to air through September. You can either keep Starz or binge everything at the end of October, but there’s a deal for $5 per month for three months available right now.

See at Starz
Read more: Best Streaming Service of 2022: Netflix, HBO Max, Disney Plus and More
Cancel at least two services in September
Apple TV Plus:?While the service produces high-quality content and a nice lineup for kids, there isn’t much must-see content here for September. Releases include Hillary Clinton’s Gutsy (Sept. 9) which features guests like the Little Rock Nine, Megan Thee Stallion and Jane Goodall, Central Park season 3 (Sept. 9) and The Greatest Beer Run Ever with Zac Efron Russell Crowe (Sept. 30).?
Paramount Plus:?Nothing hot on Paramount Plus this month. But you can stream new episodes of reality shows like Big Brother or Ink Master, or catch the season 6 premiere of The Good Wife.
Honestly, Disney Plus and Peacock could have dual membership in the keep and cancel columns this month, especially if you’re not a football fan or don’t mind waiting to binge-watch certain series. And there’s nothing wrong with watching Hocus Pocus 2 in October. It’s your choice.

Sorry, there’s still no reason to cancel Netflix when releases like Cobra Kai are arriving this month.
NetflixSave money by holding off a few weeks
If you’re not someone who routinely gets FOMO, then a smart method is to wait until the bulk or all episodes of your favorite series land on a platform. That way, rather than pay for a service for several months to cover the 6- to 10-week run of a show, you can catch up on everything by subscribing for one month. And then repeat the cycle again.
As an example, there are 12 episodes of Andor coming to Disney Plus. The finale airs in November, so all episodes will be available to stream at that time. Though it premieres on Sept. 21 and continues through the fall, why pay for three months of Disney Plus when you can wait to watch it in full anytime in November? If this is the only series you want to watch during this period, it makes sense to be patient to save money.?

Cassian Andor broods in upcoming Star Wars series Andor, which airs on Disney Plus into November.
Lucasfilm
How much do you pay each month for your streaming services? Netflix is $10 to $20, Disney Plus is anywhere from $3 to $8 depending on bundles, HBO Max costs $10-$15, Hulu starts at $7 and Starz runs $9. The others have a base rate of $5 per month. Should you decide to churn, set a calendar reminder to ping you when it’s time to re-subscribe or cancel. We’ll see you in October for another streaming breakdown.