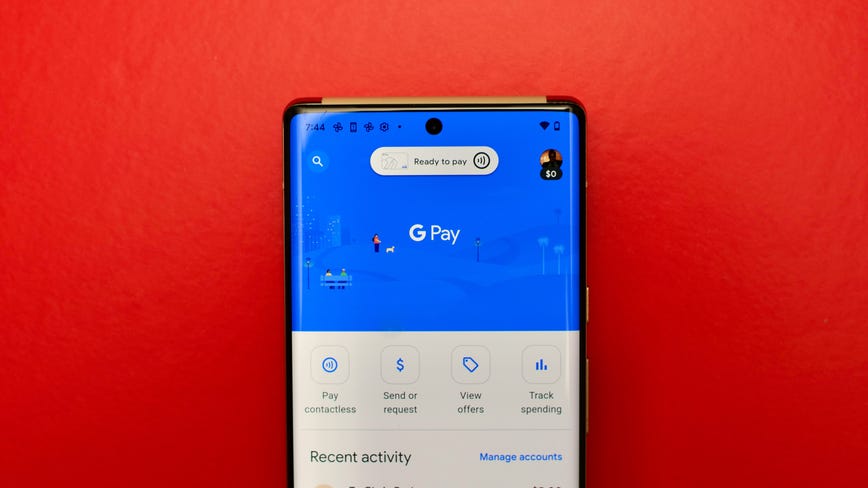 Google Pay can be used in stores, restaurants and online. You can also send and request money.
Patrick Holland/CNET

Google Pay is a digital wallet that’s tied to your Google account. You can use it to send or request money with friends (kind of like Venmo), use it in apps to pay for things and use it at a store or restaurant with an Android phone or watch running Wear OS. But perhaps the real reason to use Google Pay is that it’s faster and more secure than using a physical debit or credit card.
Replacing Android Pay and Google Wallet in 2018, Google Pay works without sending stores and restaurants your actual card numbers. Essentially, your credit and debit card information is stored securely on Google’s servers, and instead of transmitting your card’s numbers, Google Pay uses a token called a virtual account number as a stand-in.
Over the years, Google has added more functionality to the app. You can use and store membership cards, gift cards, transit cards and even get promotional offers for certain goods and services.
But before we can enjoy all the perks of Google Pay we need to get it set up.


Set up Google Pay
The first thing you need to do is get the Google Pay app. Google Pay is also available on iOS. Once you download the app, the setup instructions are the same as the Android version.
1.?Download the app from the Google Play Store to install it.?
2.?Open the Google Pay app, and tap the Get Started button.?
3.?Next, tap the Connect to Gmail button. A window will pop up asking for your permission to give Google Pay access to your device’s location.
4.?Google Pay wants to know your location so it can notify you when you’re in a place that accepts Google Pay or uses your loyalty cards. To use the locate feature, tap the blue-lettered Turn On button at the bottom of the screen.
5.?Across the bottom of the Google Pay app are four tabs: Home, Payment, Passes and Send. Go to the Payment tab, and then tap on the Add Payment Method button.
You can also start on the Home tab. Go to the Pay With Your Phone in Stores section and tap the blue Set It Up button. If you already have a card on file with your Google account (maybe for the Google Play store or for another Google service) it will offer to connect that credit or debit card to the Google Pay app on your phone. Slightly creepy, but mostly useful. 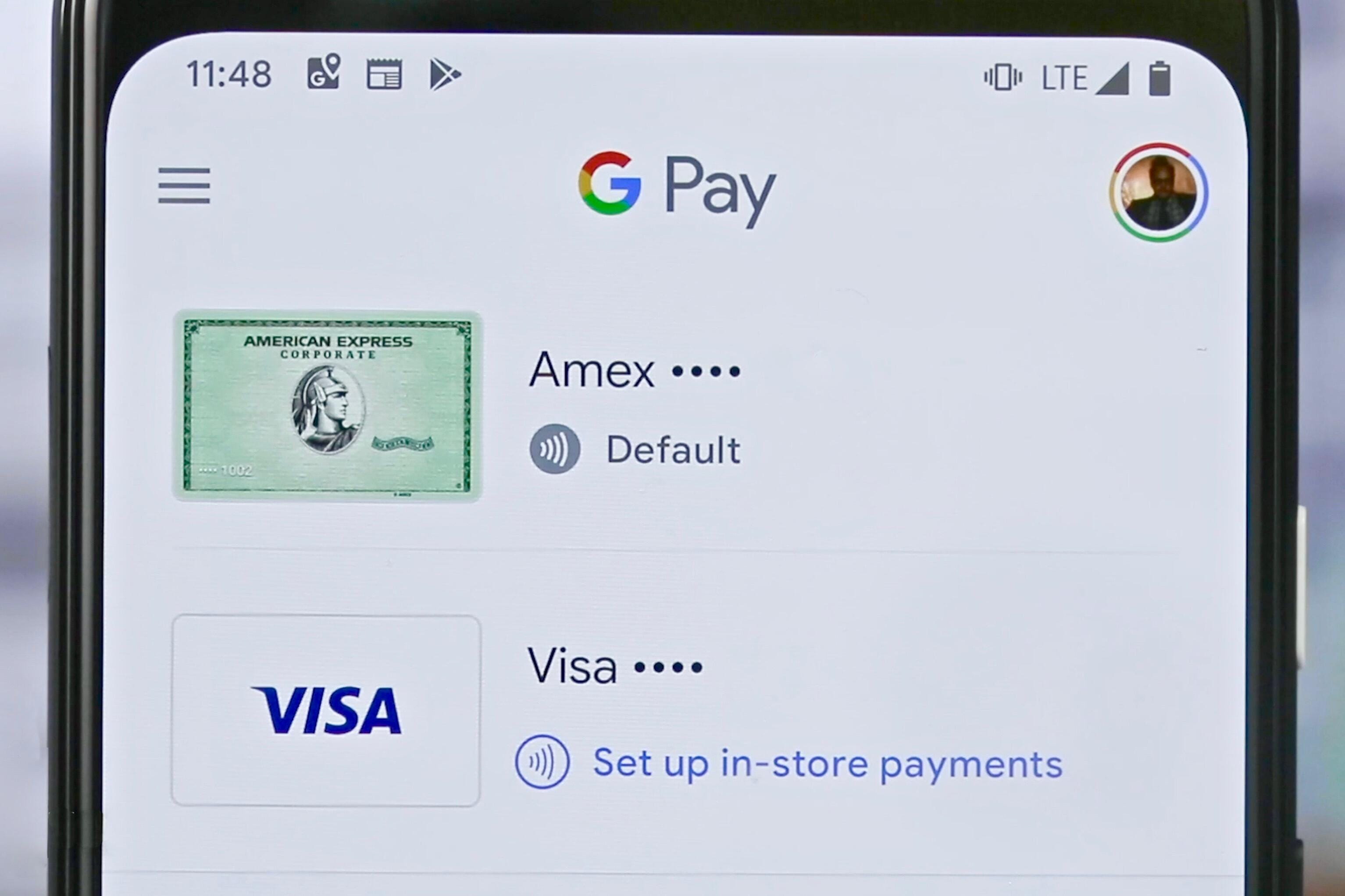 You can use credit and debit cards already connected to your Google account or add new ones.
Charlie Wagner/CNET
6.?You also have the option to add a new card to your account. To do so, tap Add a New Card and then hold your card in the camera window that pops up. After the camera captures your card’s information, verify your card’s expiration date and CVC number.?
7.?Once you do, hit the Save button at the bottom of the screen. Read the Terms of Service, and tap the Accept & Continue button at the bottom.
8.?Next, your bank will verify your card, and you’ll get a message stating that your lock screen will be used for Google Pay. Once you understand that, hit the blue Got It button at the bottom.?
9.?Next, you’ll find yourself on the Verify Your Card screen. Choose where you want to receive the verification number. Depending on your card you can have it sent to either your email or phone number. Once you choose, tap the Continue button. When you receive the number, type it into the field on the Verification Number screen and tap the Submit button. 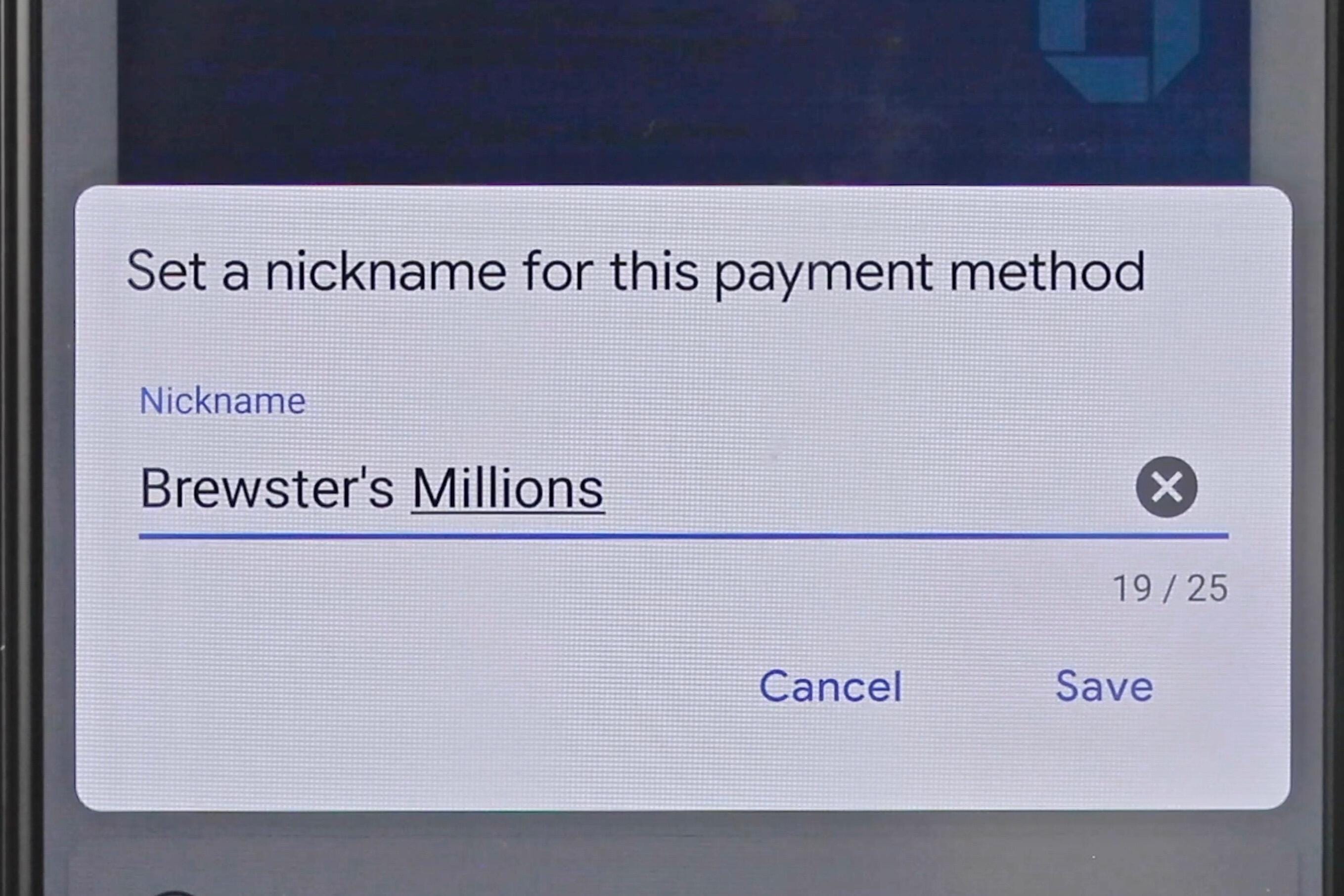 Under your card’s details, you can add a nickname and set a card to be the default for payments.
Charlie Wagner/CNETSet a default card for Google Pay
You can store multiple cards on Google Pay and even set one up as the default card.?
1. Tap the stored card you want to set as default.?
2.?When the card’s details screen pops up, tap the Default for in-store payments slider button. It takes a minute or so to turn blue. How long exactly? Well, I had enough time to add a nickname for my card (Brewster’s Millions).
How to use Google Pay at stores, restaurants and ATMs
To use Google Pay at a store or restaurant, look for the wireless payment logo at a register. It’s the one that looks like a hand holding a square piece of cheese over a plate of curved hotdogs of increasing lengths. 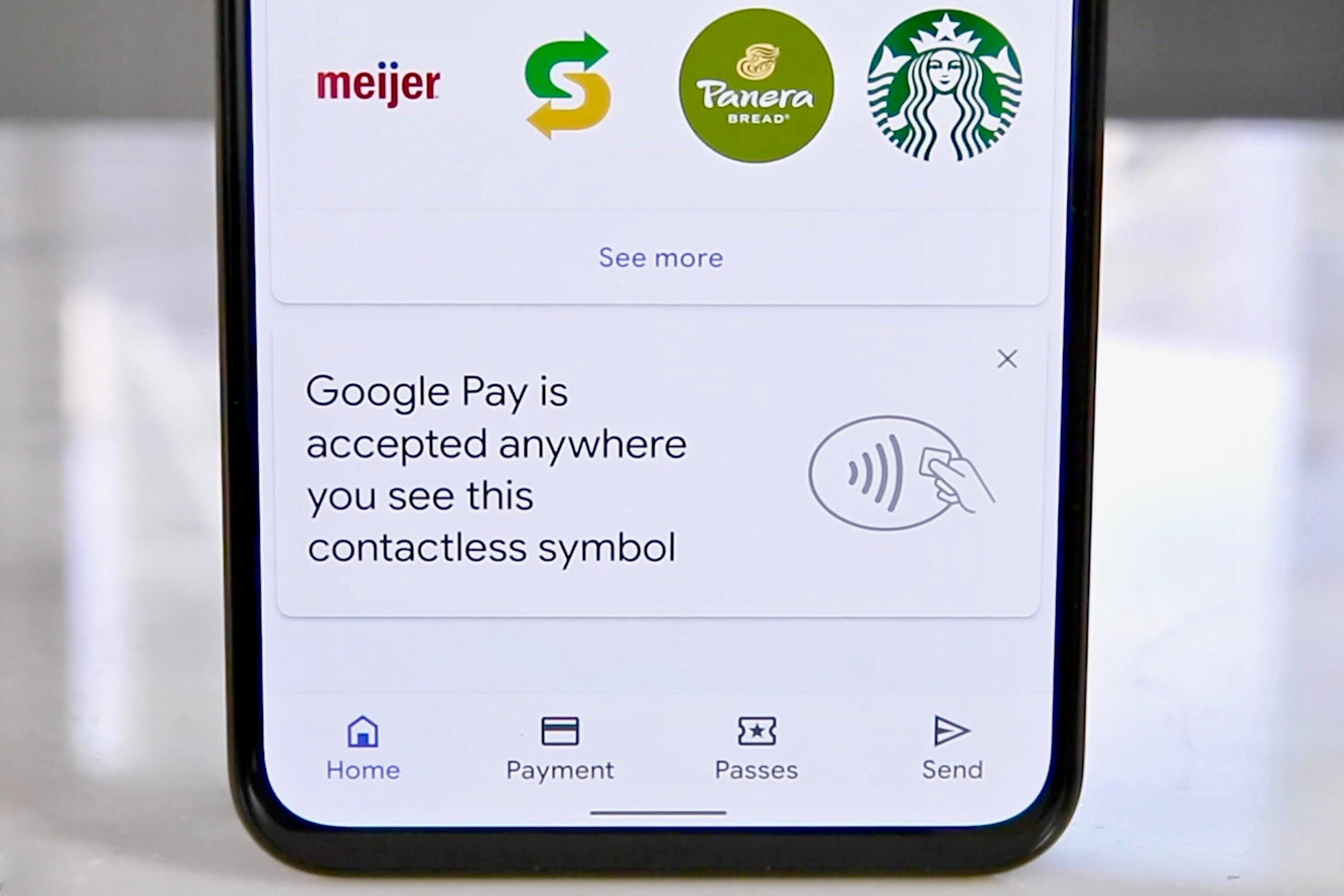 You can use Google Pay anywhere you see the contactless symbol.
Charlie Wagner/CNET
When you see the symbol, unlock your phone near the register (hold it inches away), and Google Pay will trigger open with your default card. Google Pay, like Apple Pay, uses NFC to connect to a register.
Paying for stuff with your phone may be novel, but Google Pay can do so much more. With it, you can use your phone to get money out of an ATM. If you have a Chase debit card tied to Google Pay, for example, you can use it at a Chase ATM with a contactless reader to withdraw money. Of course, you still have to enter your debit card PIN number to do so. 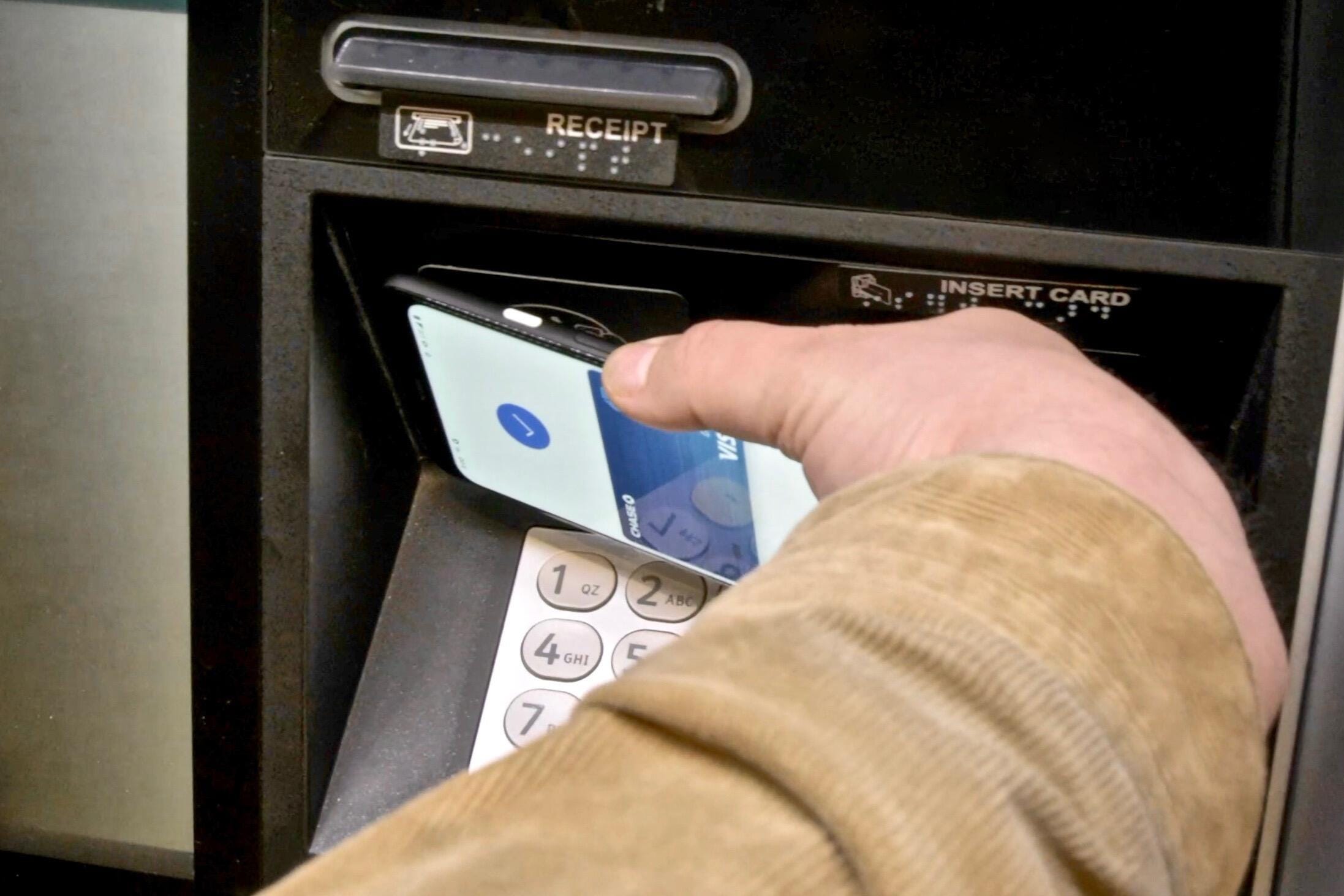 Once of the most convenient uses I found for Google Pay was using it to get cash out of an ATM.
Charlie Wagner/CNETSend and receive money with Google Pay
But Google Pay isn’t just about using your phone instead of plastic cards. You can send and request cash with friends and family, just like you can with Venmo and Zelle.
1.?To send cash, open the Google Pay app.?
2.?Tap the Send or Request Money?button.?
3.?From there, select a contact to send money to or request money from.?
4. If the person you’re sending or requesting from isn’t in your contacts, type in their phone number or email.
5. If they have Google Pay on their phone, they can share their Google Pay QR code with you (or vice versa).
With Google Pay, you can also send or request money from your browser.
1.?Go to pay.google.com and log in.?
2.?Next, select the Send or Request Money tab.?
3.?Tap Send Money or Request Money.?
4.?Enter the amount of money you want to send or request, and then enter a recipient’s phone number, email or enter their name to pull in info from their contact card.?
5.?Finally, tap Send or Request.
Use Google Pay on websites and apps
You can also use Google Pay at checkout on websites as well as in apps such as Caviar, Starbucks and Airbnb. Anytime you see the Google Pay icon on a site or in an app, simply tap it at checkout.?
Add loyalty and gift cards to Google Pay
Your Google Pay Wallet lets you add loyalty cards and gift cards to it. For example, I added my AMC Stubs A-List card. But there are a bunch of merchants supported, from Starbucks and Walgreens to Ikea and airlines such as United, Delta and American.
1.?To add a loyalty or gift card, open the Google Pay app and tap the Passes tab at the bottom of the screen.?
2.?Then, tap the blue Pass button with a + sign.? 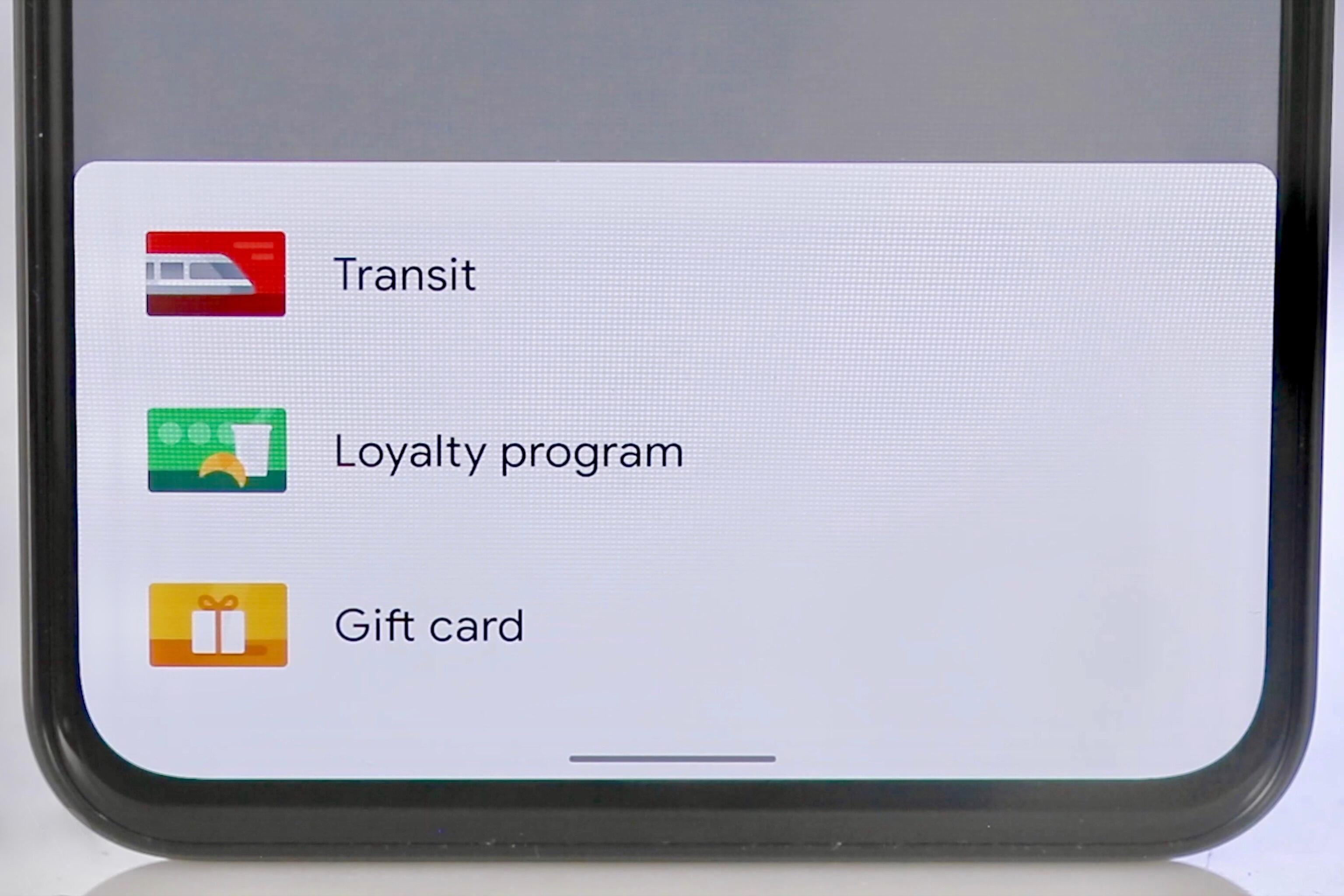 Google Pay also lets you store your loyalty memberships and retail gift cards, too.
Charlie Wagner/CNET
3.?Next, select either Loyalty program or Gift card from the pop up window. When the list of retailers and restaurants appears, choose the company for your card or loyalty program.
4.?If you have a gift card, you’ll be prompted to enter the card’s details. For a loyalty program, a camera window will pop up to scan your loyalty membership number. Some companies will give you the option to enter the numbers manually by tapping the enter manually button at the bottom of the screen. If you don’t already have a membership, some companies such as sandwich-maker Jimmy John’s will let you sign up for a new account.
Passes don’t work as seamlessly as a credit or debit card, but it can be handy having all your memberships and gift cards in one place. And here’s how you use a gift card or your loyalty membership card.
1.?Go to the Passes tab and choose the loyalty card you want to use.
2.?Next, present the barcode to the cashier to scan. If your card doesn’t have a barcode, read your membership number to the cashier.?
To sort your loyalty cards, open the Passes tab. Then, tap and hold the card you want to rearrange. Move it up or down to reorder it as you want.
Use Google Pay on a transit system
Google Pay also lets you add your transit card to your phone to get on trains, subways and buses.
1.?To add a transit card, open the Google Pay app and tap the Ride Transit button at the bottom of the home tab.?
2.?Next, select the transit system you want to ride.
3. Tap the blue Continue button.?
4.?Depending on the transit system, you might be taken to a transit website or app to purchase your tickets or passes. Sometimes a small Activation window will pop-up. If that happens, tap the Continue button.
To use a pass or ticket, wake up your phone. For some transit systems, you may need to unlock your phone and choose your ticket. Next, hold your phone to the card reader and wait until you see a blue checkmark.
Google Pay and your transaction data
In doing research for this story, I was curious about the data Google collects when you use Google Pay. I found out that Google may use data from Google Pay transactions:

And as straightforward as all that sounds, it’s that last one — “other Google Pay features” — that leaves the door open for targeted ads. If you’re already a Gmail user, however, you’re pretty much letting Google do the same thing.
More on paying with your phone