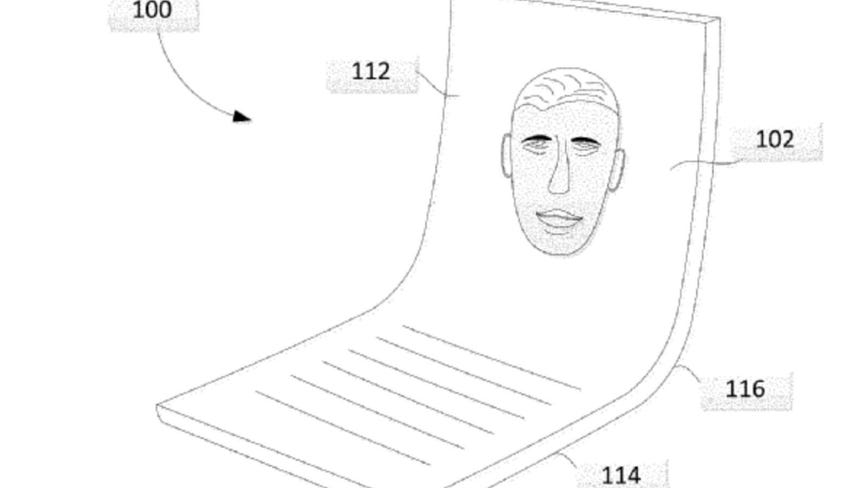 Google I/O 2022 is set for Wednesday, May 11 (here’s how you can watch Google I/O live), and we’re hoping to hear about the company’s new products and software, like?Android 13?and?Google’s first smartwatch, said to be called the Pixel Watch. However, there’s one rumored device we may have to wait a little longer to see: a foldable Pixel phone. ?
Google has spent the last several months developing features for foldable phones with its Android 12L platform, and alongside that development are rumors that a foldable Pixel phone could be in the works. If true, Google expanding its Pixel line would mark an even greater leap than the design overhaul that arrived with the Pixel 6 series in 2021.
Although the phone’s name is nowhere near confirmed — it could be called the Pixel Fold or maybe the Pixel Notepad — the idea that the phone could be in the works wouldn’t be a big surprise. In addition to the plethora of rumors doing the rounds, there have been leaked internal documents as well as moves by Google over the years that seem to indicate a bendy handset is in the works. In December 2018, it filed a patent application for a foldable device, and in May 2019 Google confirmed that it had been prototyping the folding technology.
Whether or not we’ll be able to buy a foldable phone from Google later this year, however, is unconfirmed. But display analyst Ross Young tweeted that a foldable Pixel would launch in the last quarter of 2022 — “probably October.”
Google isn’t the only marquee name in Big Tech that’s reportedly throwing its hat into the foldable phones ring. There have long been rumors that Apple’s gearing up to do the same. CNET has also covered all the buzz surrounding the so-called?iPhone Flip. 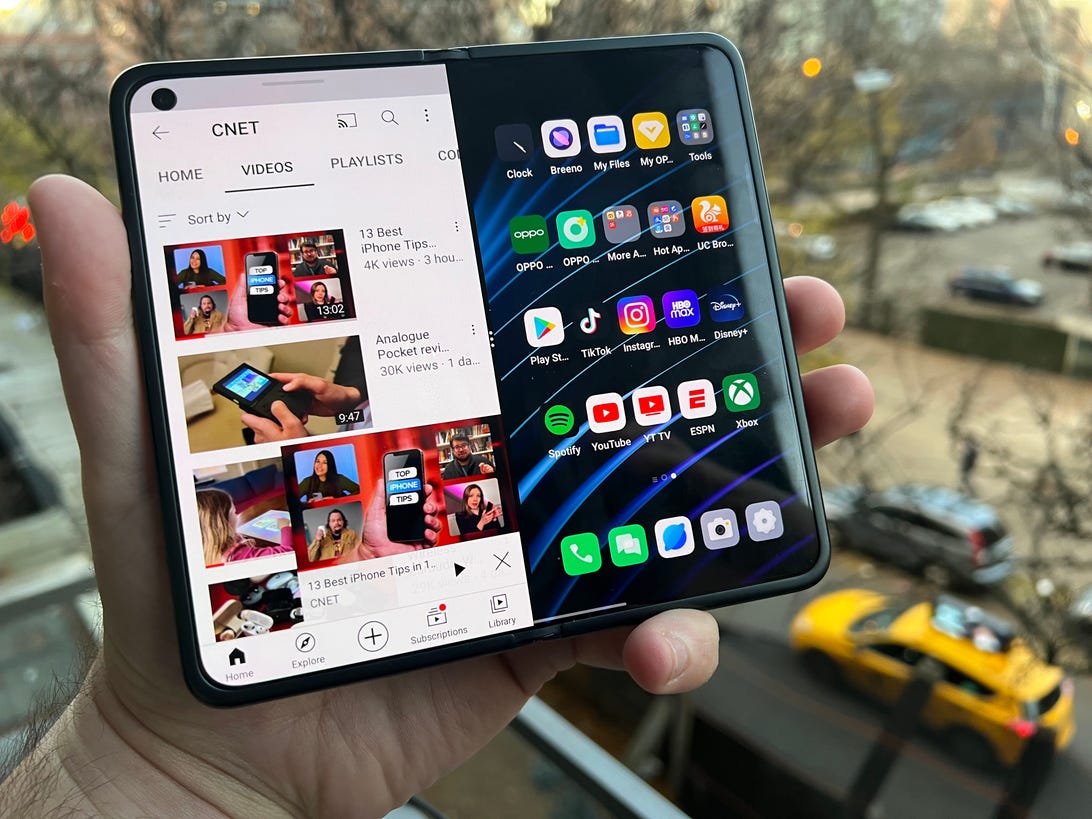 Even when the phone’s opened, it’s hard to find a crease on the Oppo Find N.?
Eli Blumenthal/CNETPixel Fold design: More Oppo Find N than Galaxy Z Fold 3
Animations found in Android 12L, Google’s software designed specifically for large-screen devices such as tablets and foldable phones, have offered hints at the possible appearance of the Pixel Fold. The Google foldable was initially rumored to resemble the taller and leaner design of Samsung’s Galaxy Z Fold 3, which has an approximate aspect ratio of 22.5:18. But according to 9to5Google and other media outlets that have reviewed the Android 12L animations, the opened-up Pixel Fold is more likely to resemble the squarish shape of Oppo’s foldable phone, the Find N. When closed, it’s believed to have an aspect ratio closer to 18:9. If that’s true, it would mean that, like the Find N, the Pixel Fold could be more natural to use as a regular phone when closed.
Read more:?What Google’s Rumored Pixel Watch Can Learn From Its Phones
Pixel Fold camera: Camera module may be step down from Pixel 6
There haven’t been many rumors about the Pixel Fold’s camera, but there’s room for some speculation, courtesy of 9to5Google. The website is reporting that the Pixel Fold will have two front-facing 8-megapixel lenses, one presumably on the cover and one for the interiors, as well as a 12-megapixel rear camera. The main sensor is expected to be a step down from the Pixel 6 series, since it’s rumored to rely on Sony’s IMX363 sensor, used in the?Pixel 3?in 2018, as opposed to Samsung’s top-of-the-line GN1 sensor, from the main 50-megapixel camera of the Pixel 6 series.?
If I had to guess, the logic for this potential decision comes down to the size of the GN1 sensor, which is one of the larger camera sensors on the market. This means it’ll be tough for a foldable phone to carry it without increasing the overall heft of an already-hefty foldable device.?
Read more:?Pixel 6A Rumors: Everything We’ve Heard About Google’s Next Phone 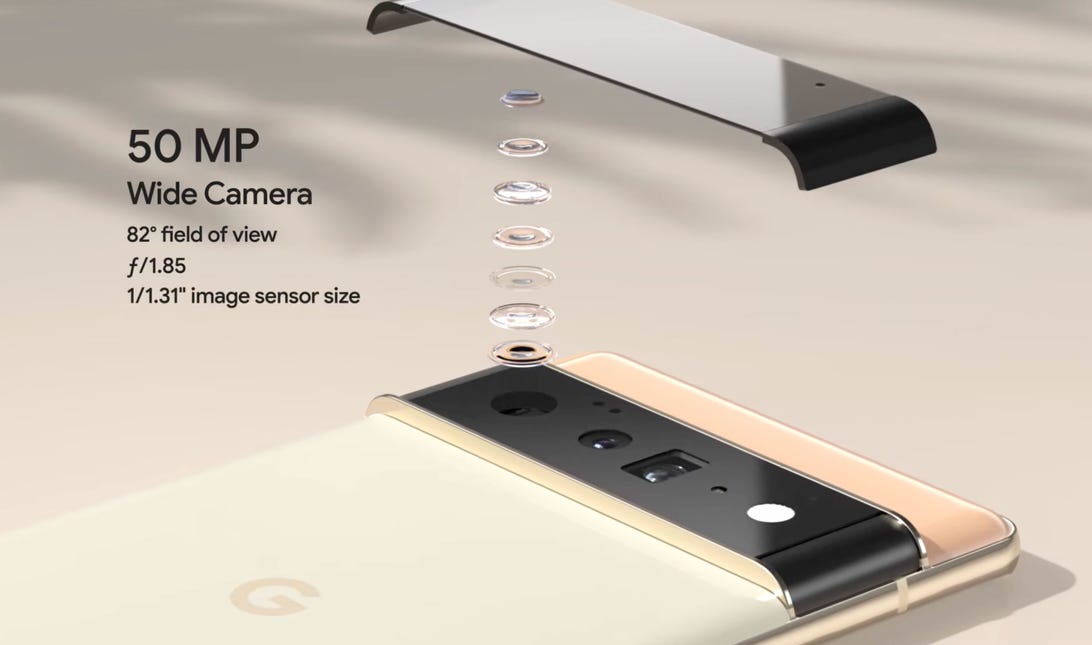 Google put a relatively large image sensor into the main camera of both its $599 Pixel 6 and $899 Pixel 6 Pro.
Google; Screenshot by Stephen Shankland/CNETPixel Fold price: Under $1,800?
There’s no telling for certain what a phone will cost until launch day — if that happens at all. But according to a report by 9to5Google citing an unnamed source, the Pixel Fold will be priced below the $1,800 (￡1,320 or AU$2,500) mark. Another report spotted by BGR in March claims that the price could be as low as $1,399. That’s less than Samsung’s $1,800 Galaxy Z Fold 3, and if true it’s a comparatively low price, especially considering the Pixel Fold would be Google’s inaugural foldable. For context, Samsung’s inaugural folding phone, the Galaxy Fold, started at $1,980 before its price dropped over the years.?
Read more: The Wait for Google’s Rumored Pixel Watch May Soon Be Over
Pixel Fold processor: Tensor
Considering Google went to the complex and costly trouble of developing its own system-on-chip technology, it’s all but certain the Pixel Fold will run on the?Tensor?chipset, which debuted on the Pixel 6 series.
For more, check out all the rumors we’ve heard so far about the Google Pixel Watch and Android 13.?