Most of the?best projectors we review here at CNET fall in the $500-to-$1,500 range, because we’ve found that’s the sweet spot for price and performance. We’ve done a handful of high-end projectors, which are great if you can afford them, and we’ve also found some gems for just a few hundred bucks.
Some of those $250-ish no-name projectors, like the AAXA P8 and the Vimgo P10, did surprisingly well in my comparison tests. They delivered big, perfectly watchable images for less than the price of a cheap phone. Which led me to the next question: How cheap can you go??
Amazon is rife with projectors that cost around $100, often way less. Are any of these any good? Do any of them even work? Someone should find out. Then I realized, “Hey! I’m someone!” So I made a list, checked it twice, and then bought (OK, CNET bought) and reviewed the four that seemed the most interesting. One is less than the price of a video game, one costs less than the price of a family dinner at Chipotle. All of them, amazingly, work. Sort of. Here’s how they looked. 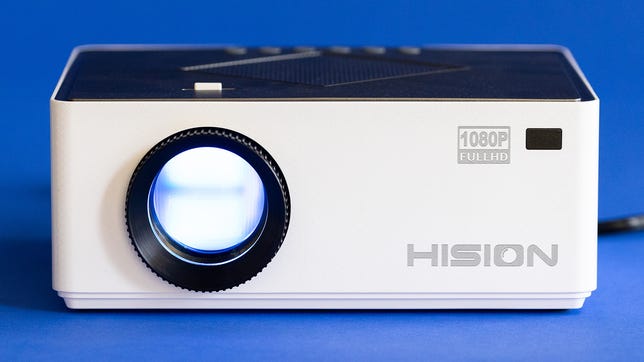 Saying the Hision is the best projector in this roundup is a little misleading. It is the least bad projector in this roundup. It can create a watchable image, mostly, and is bright enough to get that image to roughly least TV-size. It’s even 1080p resolution. So end the superlatives, such as they are.?
It’s not particularly bright, in the ballpark of mini and portable projectors. The contrast ratio isn’t much worse than some projectors we’ve reviewed, though that isn’t saying much. It’s surprisingly loud, however. And the uniformity is bad, making the center of the image noticeably brighter than the edges.?
It also had some bugs. Well, a bug. Literally. Forever entombed between the image sensor and the lens, it appeared as an ovoid splotch of darkness a few dozen pixels wide near the middle of the image. Charming.
The Hision was good only in comparison to the others here. If you just want to spend around $100, though, you could do worse.
Here’s where I mention that pricing on all of these ultracheap projectors varies quite a bit, sometimes from day to day. If the Hision costs more $100 when you read this, it’s an even worse value. For around $250 the?Vimgo P10?and AAXA P8 are both brighter and far more watchable, and definitely worth saving for in my opinion. 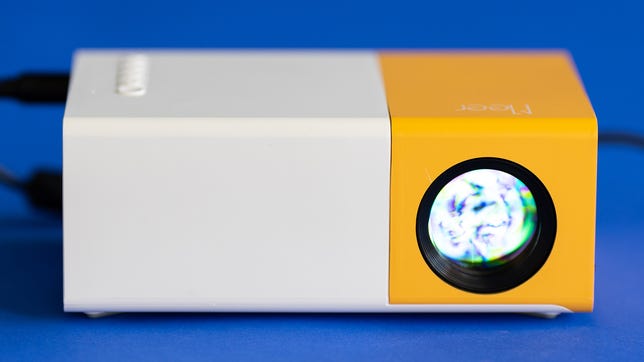 The YG300-Pro isn’t good. It’s half as bright as the Hision, has a worse contrast ratio and worse color (and that’s saying something). It shares many of the same issues, including abysmal uniformity. Some colors, like red, are very undersaturated, making for a lifeless, cold image. It’s 720p, so the pixels aren’t the size of paving stones at least.
Bottom line: The Hision is definitely better but if it’s significantly more expensive when you read this, the Meer makes a solid runner-up if you simply can’t save up for a better cheap projector. 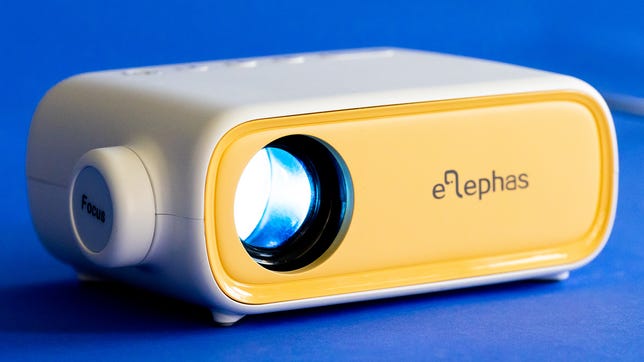 A projector for the price of a video game

The Elephas JingHuier is half the price of the other two on this list, and it’s pretty bad. In its favor, the design features a friendly, round focus knob and a rather pleasant curvy design with a yellow front. Unfortunately, it’s the second dimmest projector we’ve ever reviewed, putting out a nearly invisible 33 lumens. The image isn’t the worst I’ve seen, but it’s close.?
Dominated by big, SD-resolution pixels and mediocre color, its biggest strength is that it’s not the MissYou YG300 (see below). 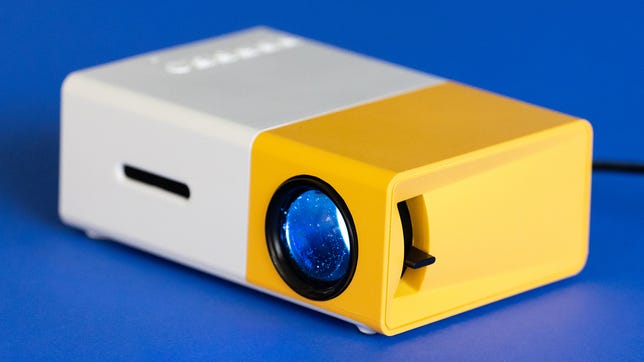 A projector nobody should buy

The MissYou YG300 is very bad. Terrible. It’s unquestionably the worst projector, and probably the worst display, that I’ve ever seen. The image is a smeary, joyless mess of washed out colors and sadness. The color red is barely a suggestion. It puts out enough light to imperceptibly brighten a shoebox. Every one of its 23 lumens — the lowest I’ve ever measured — seem to struggle their way to the screen, then resent being there. Reviewing the YG300 made me question my life choices as a projector reviewer.
Even for $35, which is what we paid at the time, don’t buy this. Since then the price has gone up, which is the only thing that can make me recommend this projector less. 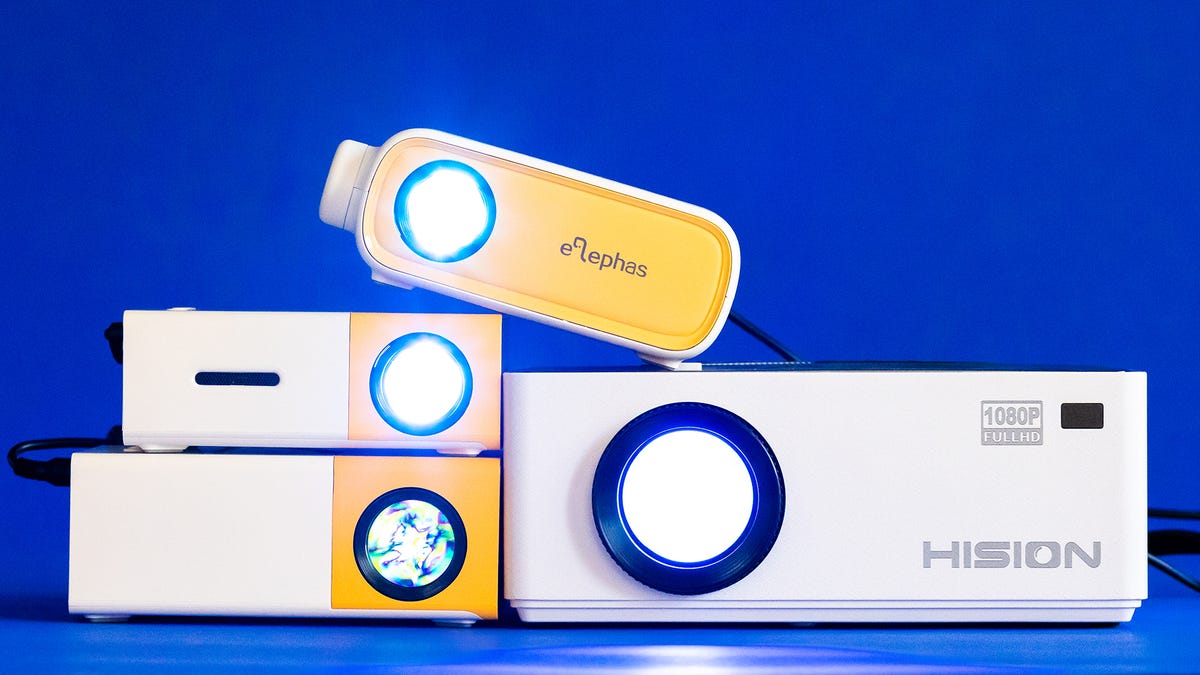 Geoff Morrison/CNET
The projectors above, except perhaps the Hision, look worse than pretty much any modern TV, no matter how cheap. You definitely need to recalibrate your expectations for what you’re getting here. I’ve used the word “watchable” a lot in this guide which is somewhere between generous and Olympic-grade hyperbole. Here are a few key reasons why:

In every measurable way, spending $150 more will get you a vastly superior product. The best cheap projectors we’ve reviewed are substantially brighter, better looking, more accurate and more detailed. I hate recommending anyone pay more for something, but in this case, it’s well worth it. Unless you’re considering these as a disposable toy, I’d advise getting something else or saving up and getting something better.
One of the understandable points of confusion are the specs and marketing of these projectors. They’re filled with… shall we say, “gifts for fiction”? One of them claims 8,000 lumens of brightness. I measured 141. Another claimed a resolution of 1080p. I measured 240, which is the same resolution as VHS tape. Lots of marketing twists the truth to sell you a product, but these projector descriptions were especially bad.
Why you consider spending more than $100 on a projector 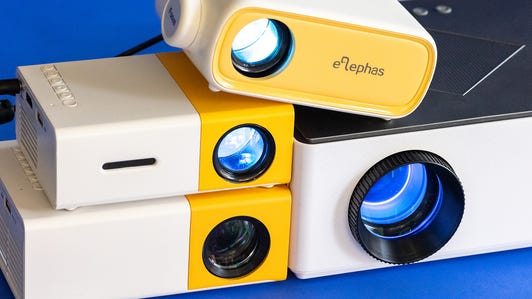 I’m all for spending as little as possible to get something cool, or at least useful. We’ve reviewed several inexpensive projectors recently that aren’t bad for the price. The ones in this roundup, however, are decidedly not good, even for the price. They’re exceptionally dim, so they can’t create a very large image, and it would be generous to call their color and contrast “marginal.”?
What do you get with?slightly more expensive projectors, starting at around $250? Picture quality is an obvious one, in terms of resolution, detail and color, most noticeably. Spending even a little bit more gets you significantly more light output, which means the picture is easier to see and you can create a larger image as well. Some have built-in batteries so they can work completely wirelessly. Lastly, many more expensive projectors have built-in streaming. This means no external device is needed to watch Netflix.
If you’re considering one of these $100-ish projectors to have on hand for the kids to occasionally watch a show in a room without a TV, the TV is absolutely a better option. It will be easier to use, easier to watch, and can be seen with the lights on. It’s not even that different in price. We recently spotted a 24-inch TV with streaming built in for $80. It’s less portable, for sure, but infinitely more useful.
If you were considering these projectors for something inexpensive and portable for camping, the Meer and MissYou can technically run off a battery. But then they’re even dimmer, if you can believe it. Don’t expect to create an image much larger than the smallest of TVs. If it doesn’t break your budget, something like the AAXA P8 is way brighter, or the Anker Mars II Pro which is good all-around for a bit more. 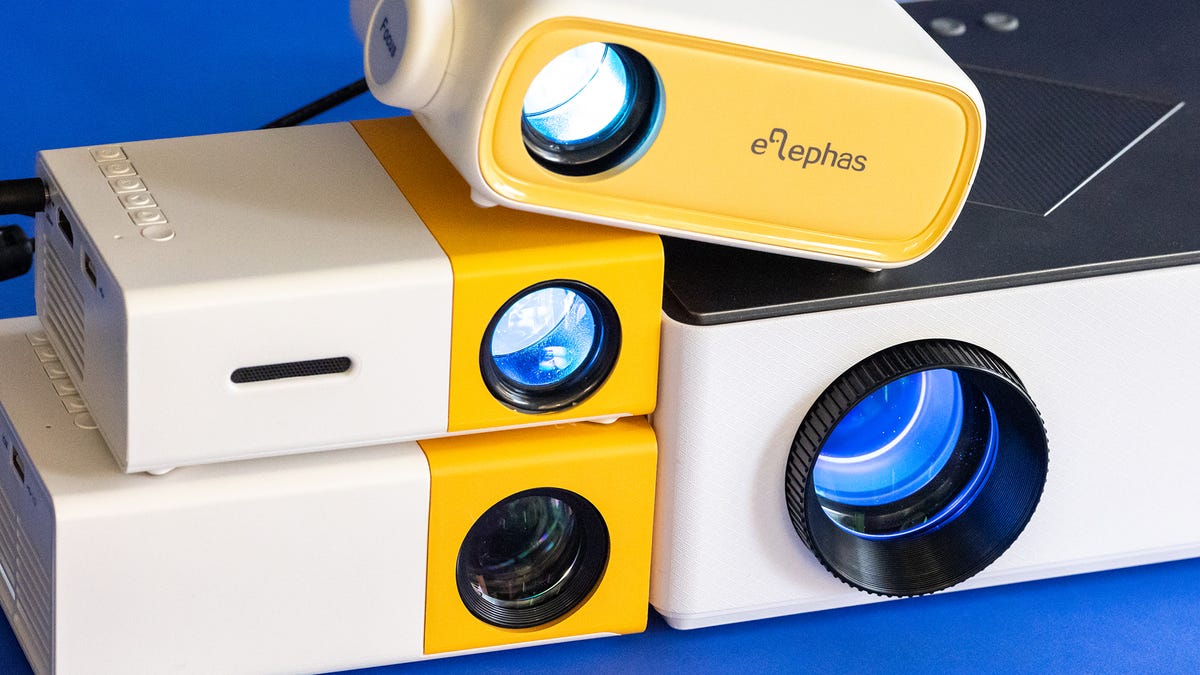 Do these ultracheap projectors actually work?

Surprisingly, yes! Not well, mind you, but they do create an image on a flat surface for $100 or less.?

Can you stream Netflix on one of these projectors?

Yes, but with some significant caveats. Generally speaking, the easiest way to stream to these is by using a streaming stick?connected to their HDMI inputs, which does work. These projectors don’t have built-in apps, despite their marketing images implying otherwise. Don’t expect to be able to mirror your phone’s screen and watch Netflix that way. There are copy-protection restrictions that make this unlikely to work.?

Can I connect a gaming console (Xbox, PlayStation, etc.)?

Technically, yes, anything with an HDMI connection should work. That said, it’s worth noting that with the exception of the Hision, these are extremely dim projectors. You won’t be able to see much, if anything, with the lights on. Even with the lights off, a 50-inch image will still be hard to see.

Do I need a screen?

Yes and no. You technically don’t need a screen. Any smooth, flat surface will work. A screen will improve the image, however, as they typically have no texture, and many can reflect back more of the light toward where you’re sitting and less elsewhere. This means the projector will seem a little brighter. That said, a screen isn’t going to make a $35 projector look like a $3,500 projector, or probably even a $350 projector. If you have the budget to add a screen, you’re probably better off getting a better projector now and saving up for a screen later.