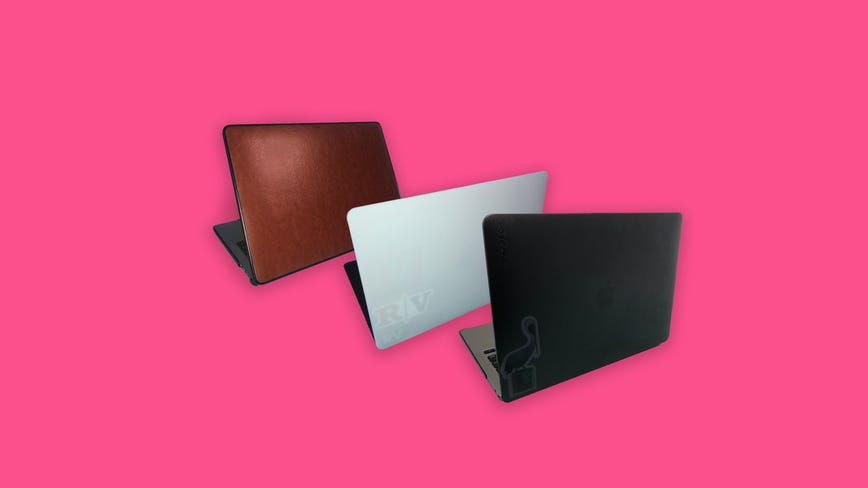 When you invest in a MacBook — a pricey laptop with a trademark aesthetic look and feel — a dilemma arises. Do you slap a protective hardshell case on it to keep it safe? Or would a case detract from the sleek design you paid so much for? Could a case, in an ironic twist, actually end up damaging the MacBook??
I had to make that exact call the summer after I graduated from high school, when I finally splurged with my saved-up grocery-store cashier earnings on the ultimate luxury: a 2017 MacBook Pro that I hoped would get me through my college years and beyond. Despite the MacBook’s reputation as tough, the space-gray laptop still felt delicate in my hands. The next logical move was to buy an all-over hardshell case.?
Casing the MacBook struck me as a no-brainer at the time: I shuddered to imagine my hard-earned, first-ever Apple computer getting flung onto desks, jostled between textbooks and doused with coffee. Even a flimsy plastic case would offer a layer of protection from dings, dents and scratches, plus some peace of mind, right? It was certainly better than nothing, I reasoned.?
As I carted my MacBook off to college, its cheap-ish teal case from Amazon did indeed protect? it from scratches and dirt for the most part. But within two years, some serious problems still bubbled up. The hinge became loose, and every time I opened the MacBook, the display would gradually tilt backward. When neon pink bars started sprawling across my screen, I lugged it into the Apple store and learned I had to get the display replaced. Whatever messed up the display, it seems the hardshell case didn’t do much to protect it.
Long after the fact, I spotted some forum posts recommending against casing MacBooks at all. They said cases could put pressure on the display half, weaken the hinge, and stifle the cooling mechanisms. Apple did not respond to CNET’s request for comment.
The prospect of going caseless horrified me at first. How could I subject my precious MacBook to grubby surfaces and unprotected drops? But I gave it a try. And to this day, both my personal and work MacBooks are in the nude. Nothing catastrophic has happened, despite my fears. My personal laptop feels lighter and sleeker.?
At the same time, I’ve spotted some scratches on the bottom. And with the stay-at-home world of the past two years shifting back into go-to-the-office mode, I thought it was time to give hardshell MacBook cases another look. Here’s what I found:?

Mary King/CNET
Mosiso case
This case is lightweight — good news for the MacBook’s hinge. But in this instance, the lightness seems more indicative of thin protection than of sleek design. It’ll ward off scratches, but I wouldn’t count on it providing much more protection than that.?
The case technically snaps on, and it seems like it’ll stay attached, but the fit is poor. The top anchors are unevenly cut, making the display half difficult to put on. On the bottom half, there’s a distinct gap between the laptop and the case. The back vents appear to be partially blocked, which could lead to overheating.?
Sadly, the color doesn’t match the pretty cyan shown in the picture on the listing. It’s more of a pastel mint. On the bright side, the case comes with two pretty keyboard covers. Alas, though, the pigment is spotty. It also comes with a screen protector, but what use is a screen protector on a laptop? The included cleaning cloth is helpful, though.
Overall, it’s a nice-looking case, but it makes big compromises on quality. You could do better for the price.
$18 at Amazon 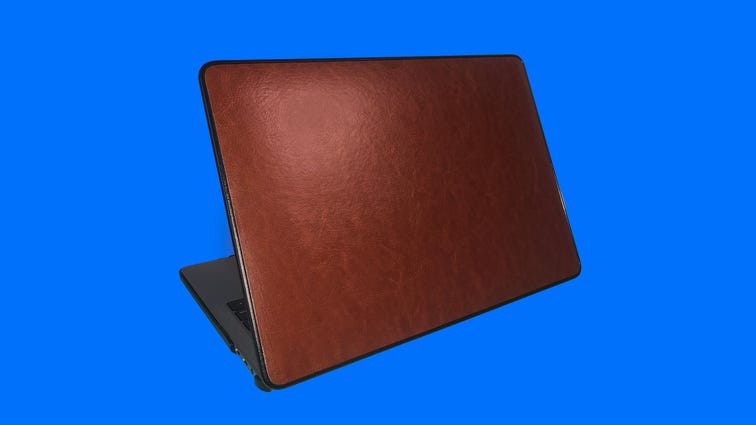 Mary King/CNET
Fintie case
The Fintie Protective Case looks and feels like an elevated version of the traditional hard shell case: It’s a tough-feeling polycarbonate with a faux leather decorative coating on top. Small anchors secure the case firmly to the MacBook without covering up the speakers or encroaching on the display.
However, the sturdy material comes at a cost: It clearly adds a good deal of extra weight to the display. My work MacBook Pro weighs 3.2 pounds on its own and 4 pounds with the shell installed. I pulled the display down part way, and the weight of the case made the laptop clamp shut. Long-term, that might not be good for the hinge.
The cutouts were advertised to leave the vents unblocked to allow for effective cooling — and at first, the MacBook seemed to have plenty of room to breathe. But after a few days of use, I noticed the MacBook was getting hotter and running the fan more often. When I took off the case during one of the computer’s fits, it immediately calmed down.
Though the faux leather doesn’t provide much in the way of cushioning, the case overall still gives MacBook an extra layer of protection from scratches and drops. Reviewers on Amazon are generally happy with it, especially for the price; the main complaint is that the plastic on the bottom half cracks and deteriorates within months.?
But for only a few bucks more than some of the other options, it’s a sturdier case with better value. I’d call it the superior budget option, even with its possible vent blockage.
$20 at Amazon

Mary King/CNET
Incase case
Color me impressed. This case fits my MacBook flawlessly: It’s as if the case were just a part of the computer itself. No wonder Apple sells it straight from its website. Unlike the previous two I reviewed, this seems like a case that will last for ages.
At $50, it’s pricey, but it could be a worthy investment. The plastic here strikes an impressive balance between durability and lightness, and it protects the laptop without putting undue strain on the hinge or display.
When I brought my MacBook on a trip abroad recently, I kept this case on it to see how it would fare. I was initially nervous about the laptop’s welfare as I shoved my backpack beneath airplane seats and hauled it around a big city. My worries were proven needless — neither the laptop nor the case itself sustained any damage.?
While this case costs far more than I’d typically like to spend on a laptop accessory, the quality makes it a worthwhile buy.?
$749 at Amazon
$800 at Best Buy
$799 at Apple
Pros of casing

Other ways to keep your laptop safe