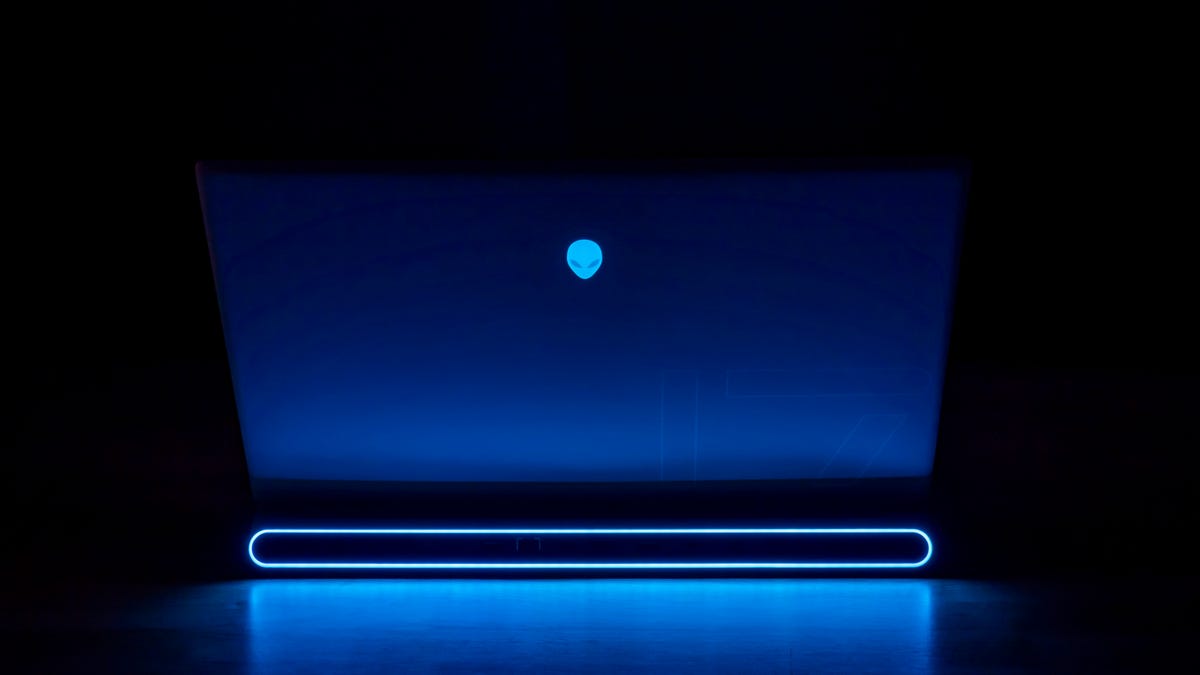 Gaming laptops have evolved to keep up with the needs of even the most intense gamers, making them a serious alternative to desktop PCs for all but the highest-power setups. Almost everything you need to start gaming is in that one chassis; you definitely don’t want to use the touchpad, though, so an external mouse is a must-have. Another bright spot is that battery life, at least for 14- and 15-inch gaming laptops, has gotten significantly longer, and hopefully the 16- and 17-inch models will soon follow suit.
But the all-in-one attraction of a laptop also imposes trade-offs that a desktop doesn’t. At most, you can beef it up with an?external mechanical keyboard, great mouse, extra external storage and multiple monitors, but over time you’ll still be stuck with the GPU and CPU, and possibly the memory and storage if it’s not upgradable.?
You can also buy a gaming laptop with top-of-the-line components in order to future-proof it — the best graphics card, the fastest processor available, tons of fast solid-state storage to hold your games and fast memory — but it can still fall short. Those powerful components may overheat at the worst moments, your battery may die or you might experience an instability that impacts your gaming performance. If improved components that fix any issues launch six months later, you probably can’t take advantage of them.
It’s not a given that you’ll need to?bust your budget?to pay for a gaming laptop. But gaming on the cheap can be difficult if you don’t shop smart, and if money’s really tight you might want to opt for a desktop, where you can start out cheap and upgrade as necessary over time. On the other hand, advances in cloud gaming have made it possible to play more games on lower-end hardware than ever before, so if you’re really looking to save money you might want to see if your favorites are cloud streamable.
How is a gaming laptop different from a standard laptop?
There’s no standard “definition” of a gaming laptop, and you’ll see a huge variety of different configurations marketed for the purpose. That’s partly because games run the gamut, from low-requirement casual games to GPU-busting AAA flagships. So I’ve drawn my own lines, at the very least for sanity’s sake.?
The biggest differentiator, at least to me, is the presence of a discrete GPU — a processor that’s on a separate data transfer pipe that the CPU, though we’re seeing a lot more interconnects for sharing memory between the two — and preferably with at least 2GB VRAM. For current laptops, that goes down as far as, say, an Nvidia GeForce MX450. You can certainly play games on a laptop with an integrated GPU, but for those any reasonably powerful laptop will do. Many PC games will only run if they detect a discrete GPU, as well. 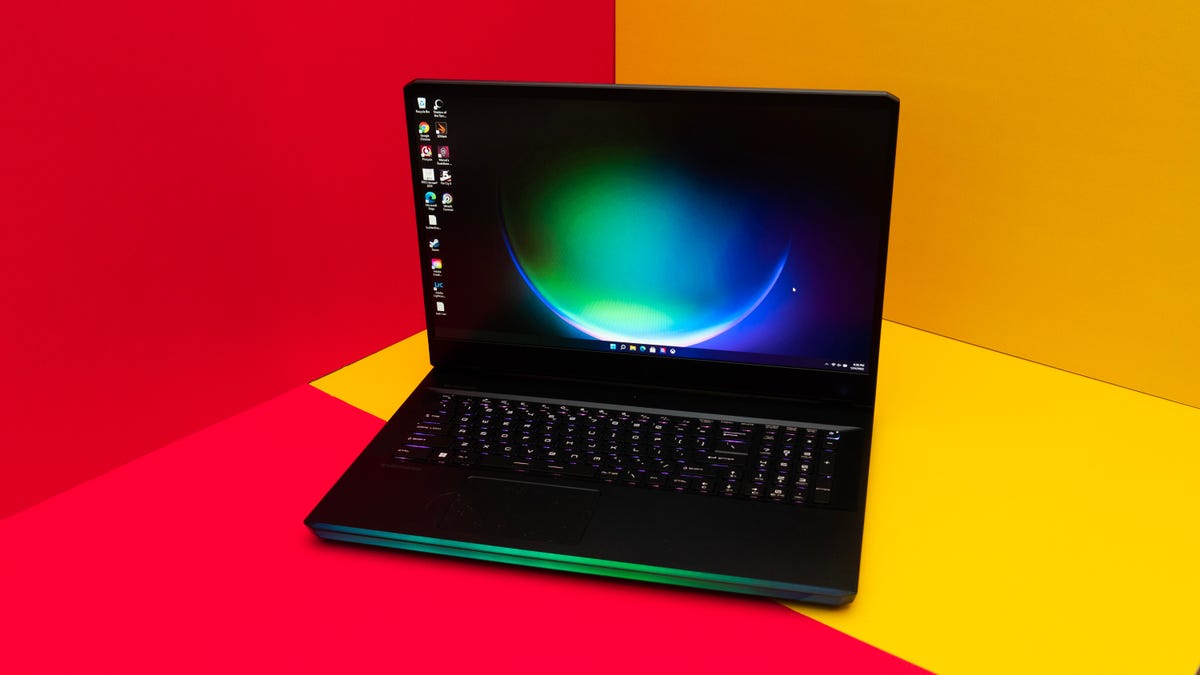 You can get a gaming laptop with top of the line specs, such as an Intel Core i9-12900HK and Nvidia GeForce RTX 3080 Ti; it’ll be fast, but big, heavy and expensive as well.
Lori Grunin/CNET
For?monitors, I’ve drawn the line at displays with a refresh rate of at least 100Hz with a pixel response of around 5ms or less as qualifications to be considered as a gaming model, so I carry that through to laptop displays.?
Is a laptop as good as a desktop PC for gaming?
It can be, especially if you surround it with the right accessories and external monitors. But at the very high end, you still can’t get the same level of components in a laptop that you can in a desktop. That’s because laptops have to compromise on power draw — how much electrical power it can throw at the CPU and GPU, especially at the same time, is limited by the space available in the chassis. The laptop equivalent of desktop parts are necessarily designed to run at lower power; they may have the same number of cores, for example, but are capped at lower clock speeds or can’t sustain them for as long as a desktop might.

The same goes for cooling. Fast-performing parts run hot, and laptop manufacturers have to design themselves into knots in order to create cooling systems that can keep up with them given the small space available for airflow and ventilation. The power and cooling constraints mean you’ll rarely find the highest-power components running at full speed in anything smaller than a 16-inch model.
Don’t be blinded by thin, sleek designs unless you’re willing to compromise on performance either for those reasons.
What specs make a laptop good for gaming?
Before specs, I always recommend deciding how much you want to spend — even if the sky’s the limit. You need some way to narrow the field initially, and it’s the best way to figure out what your options are for a given price range. Plus, it gives you a framework for deciding where you’re willing to make trade-offs. You can always throw it out the window once you’ve figured out exactly what you’re looking for, but it’s the easiest thing to start with.
For gaming, the GPU is probably the most important thing to care about, since it’s the primary driver of frame rates. If you’re planning on using the internal display rather than an external monitor, then the screen’s specs run a close second. Pairing an RTX 3060 with a 360Hz 1080p display can be a mismatch, for example; you won’t get exceptionally high frame rates with that GPU, so the screen refresh rate is overkill. You also need to pay attention to how much video memory it has, since that can be a limiting factor for loading large textures and high-resolution play.
Unless you’re a power sim player, you don’t need a top-end CPU, but I wouldn’t underbuy, either. A lot of other genres of games don’t rely heavily on the CPU, but that’s changing over time as the chips, development tools and operating system programming interfaces get better at load balancing between the CPU and GPU, especially when it comes to offloading GPU-intensive tasks where possible.?
Storage is also an important consideration. You want fast, sufficient SSD to store big games and load them quickly. But even though games can get pretty big, in the end you don’t need a ton of space (unless you also need it for things other than gaming. Are there things other than gaming?) I find 2TB a decent compromise. You can always use external storage in the future for less speed-sensitive needs. 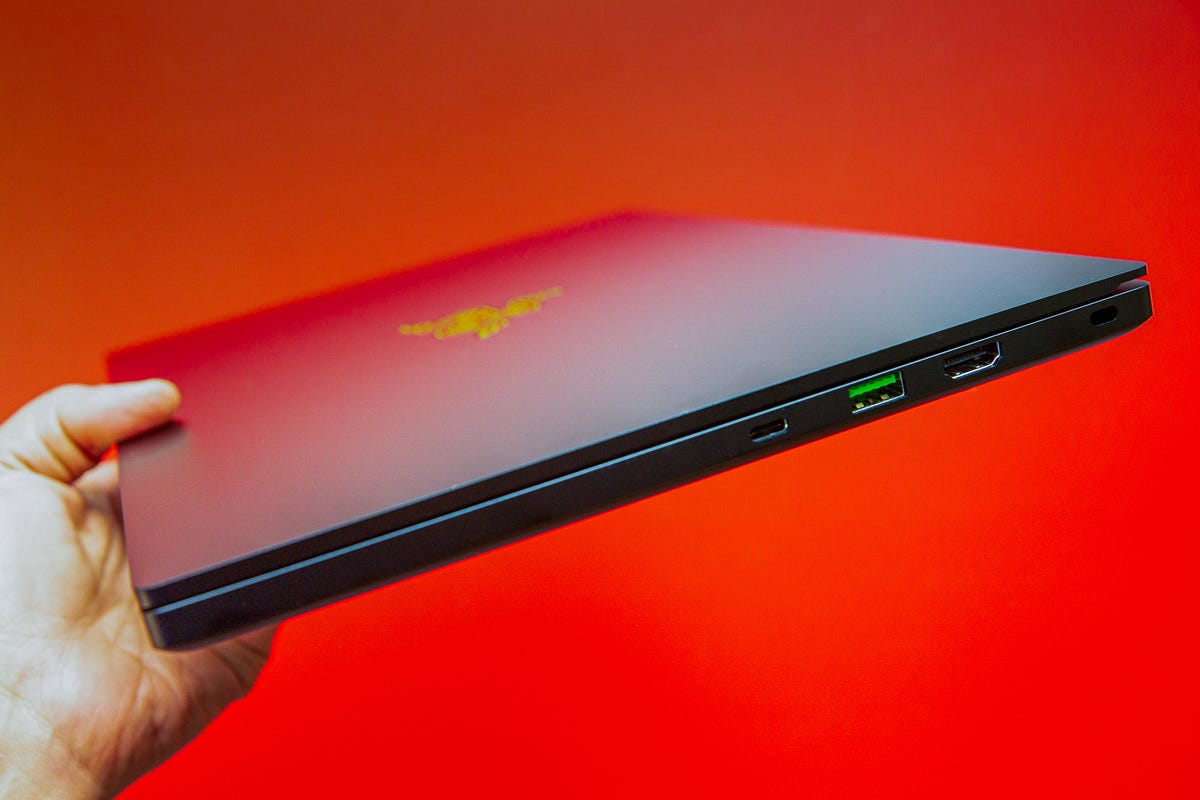 Don’t sacrifice ports for size.
Sarah Tew/CNET
While the amount of system memory isn’t a huge factor, I definitely wouldn’t get less than 16GB, simply because less may bog down Windows, which in turn will affect your gameplay.
And ports might be really important. Most accessories still use USB-A, and I don’t recommend relying on a hub for connecting your controller, keyboard or mouse. While it’s fine for everyday activity, connecting through a hub can potentially introduce latency and connection glitches that you don’t want to experience midgame. And a dedicated HDMI or DisplayPort connection can help if you plan to attach two monitors to the system.
Unfortunately, you generally don’t get too granular a level of choice when buying a laptop. You’re at the mercy of a company’s marketing decisions.?
What do I need to know about a gaming laptop GPU (beyond speed)?
The fastest graphics card currently available in a laptop is the?Nvidia GeForce RTX 3080 Ti?with the usual Max-Q variants. The Max-Q versions may run at slower frequencies than their full-size siblings — that keeps down the noise and heat and allows them to fit into thinner designs. RTX models also accelerate ray-traced rendering and provide intelligent upscaling (known as?DLSS) where it’s explicitly supported. If your favorite games don’t use it, the lower-end Nvidia GTX 1660 Ti incorporates Turing, the last generation of Nvidia’s technology, without the extra cost or power burden of the RT cores.? 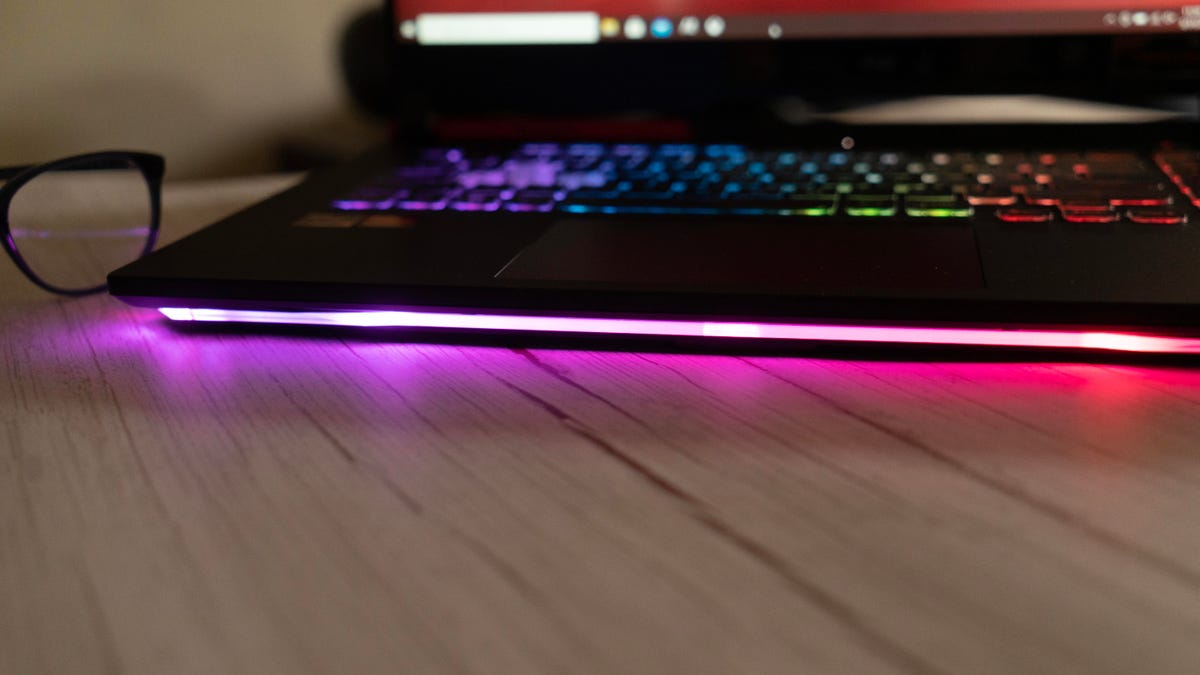 I love colorful illumination, but for a lot of people it’s not a must have. A good keyboard is, but you can always attach an external one that’s bound to be better.
Lori Grunin/CNET
Nvidia launched the new generation of its Max-Q architecture, which introduced Advanced Optimus, in 2020. It’s smarter, with the integrated and discrete graphics sharing (rather than switching) the pipeline to the display, no reboot necessary. But Advanced Optimus requires a major change to system designs, so laptops supporting Advanced Optimus are still trickling out, even two years later.
AMD’s laptop GPUs, the?Radeon RX 6600M, 6700M and 6800M, don’t quite reach the level of the fastest Nvidia RTX models, but the 6800M has gotten pretty close in the middle, with performance on average falling between the RTX 3070 and 3080. It announced the new versions in January at CES, the Radeon RX 6850M XT, RX 6650M XT and RX 6650M, which we’ve yet to test.
Intel’s getting closer to finally shipping its first generation of Arc discrete high-performance GPUs, which were finally announced at CES 2022. But the laptops the initial versions are going into aren’t really for gaming.
Does a gaming laptop’s CPU matter?
Yes, but not always. In general, sims benefit from faster clock speeds and more cores since those are required for the heavy calculations when worlds get complex. More and more AAA games are also starting to balance loads better between the CPU and GPU where possible as well. Still, a lot of games, especially first-person shooters, don’t take advantage of more than six cores.
What do I need to know about screen size and refresh rate?
And then there are the screens. All the major companies bumped their flagship 1080p configurations to 360Hz, but for many a gamer, they’re not essential: 240Hz max should be fine for those few times you can get frame rates near 240fps. Even 144Hz will do for many people, but artifacts like tearing, caused by the screen refresh rate becoming out of sync with the frame rate, depend on your games as much as your laptop brand and hardware. We’re also seeing a lot more 120Hz 4K screens in the flagship models in both 17- and 15-inch sizes and a ton of 165Hz and 240Hz QHD (1440p) options. The latter are my favorites, balancing higher resolution — certainly enough on a laptop screen — with gaming-friendly refresh rates.
We’ll see some smarter GPU architectures in this year’s laptops, for the first time supporting adaptive refresh — G-Sync and FreeSync?– with the built-in screen. If you’re going to be using the laptop display for gaming, you really want to consider those.
Do you have to compromise on battery life?
A compromise you’ve traditionally had to make has been battery life, which has typically lasted as little as 2 hours of nonstop gaming. You also couldn’t play most complex games — GPU- or CPU-intensive ones — on battery power. Processors would get throttled back and screens dim during hard-core gaming sessions, so a laptop that felt nimble when connected became a slog on battery power, turning your epic battles into battles of frustration.
That’s been changing recently, as Intel, AMD and Nvidia have concentrated on improving their power management technologies. No, you still can’t play for 10 hours on battery power, but now you can find some great gaming laptops with 10-hour battery lives to make gaming on the road more feasible. And if you can game from the cloud, that requires the least amount of work for your system, which in turn extends battery life.