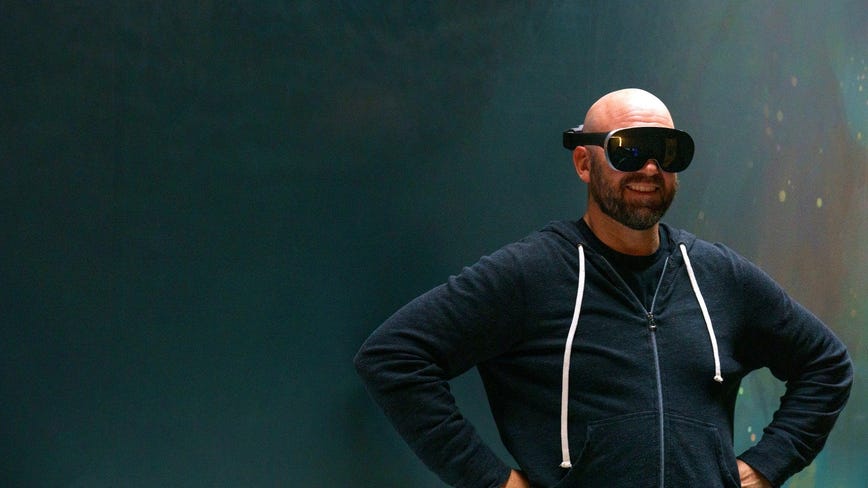 Facebook’s Andrew Bosworth showing off a prototype headset. How far along is this concept?
Facebook

A year after Facebook released its Oculus Quest 2 VR headset, and weeks before Facebook’s VR and AR-focused Connect conference, CEO Mark Zuckerberg and Facebook CTO-to-be Andrew Bosworth?showed off prototype VR headsets on social media. Whether these are anything related to products to come remains to be seen.

I spent the day with the Facebook Reality Labs research team in Redmond to demo our next-generation virtual reality,…
Posted by Mark Zuckerberg on?Wednesday, October 13, 2021


Both headset demos came from a visit by the execs to Facebook Reality Labs Research, Facebook’s future-forward research lab where Michael Abrash leads development of VR/AR hardware ideas well beyond the current consumer tech Facebook is selling now. Some of the prototype concepts could still be years away.
Notably, Zuckerberg’s headset has “retina level” resolution, the CEO said, but looks more like a standard VR headset. A few very expensive VR headsets like the Varjo XR-3 already have extremely high resolution, but can cost thousands of dollars. Bosworth’s headset, meanwhile, looks more like a glasses-sized pair of VR goggles.

Proud of the research Michael Abrash’s team is working on at FRL-R Redmond—excited to get an early look at some of the technologies that will underpin the metaverse (we work on several prototype headsets to prove out concepts, this is one of them. Kind of. It’s a long story.) pic.twitter.com/Yi9xjy5HmG
— Boz (@boztank) October 13, 2021

The timing is interesting. HTC has its own Vive product reveal tomorrow, and Facebook’s developer-focused Connect conference is on Oct. 28. We still don’t know for sure whether that conference will announce future VR hardware or not. Zuckerberg has already discussed ideas for an upcoming Oculus Quest Pro headset, which could have more sensors and a higher resolution, in a conversation with CNET earlier this year.